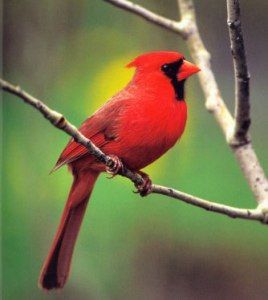 Many of us are so used to just seeing pigeons and sparrows in cities that we don’t even think other birds live in an urban setting. But this is not true. On a recent trip to visit my daughter in Brooklyn New York, we sat in her yard and watched Northern Cardinals (Cardinalis cardinalis) visit her bird feeder. I then found out that Northern Cardinals can be found in Philadelphia and most east coast cities. We really wanted a picture of them, but they did not want to be photographed! The minute we raised our cameras to take a picture, they flew away. The male Northern Cardinal is the member of the species that is most beautiful. (In nature, often the male is more colorful). The red feathers are distinctive even in winter because they don’t migrate and they don’t molt into dull feathers. They can be seen vividly against the white of the snow. The brown females have a short crest and red accents in their brown feathers. The Northern Cardinal likes dense shrubby areas and will visit your backyard if you put up a bird feeder. They look for fairly high perches for singing. Both male and female Northern Cardinals sing. In summer, their whistles are one of the first sounds of the morning. To hear the sound of the Northern Cardinal:       http://www.birdjam.com/birdsong.php?id=3 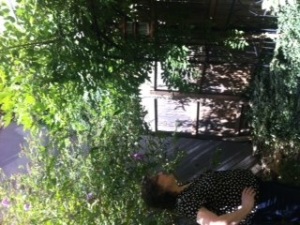 In Janine’s garden, waiting for the cardinal. Photo by Janine Dupree