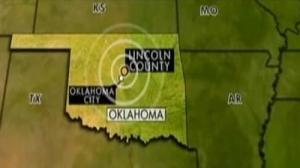 Lo and behold, on a recent trip to Olathe Kansas, Science Is My Specialty experienced an earthquake. At 10:53 pm local time I was sitting on the second floor of a very quiet house, in a semi rural part of Kansas—about 30 miles from the center of Kansas City.  I was sitting in a chair with my back leaning on the wall and I felt the wall shake back and forth for what seemed like 10-15 seconds. After a few seconds I realized it was an earthquake! Most earthquakes generally occur on fault lines (weaknesses or crack in the earth’s crust) and near tectonic plate boundaries. When underground forces build up over a long time, two bodies of rock slide past each other and earthquakes occur. The earthquake that I felt on Nov 5, 2011  in Kansas, started in Oklahoma.  It was an intraplate earthquake. It did not occur directly because of plates colliding.   It occurred far away from any plate boundary and was smaller in magnitude than an earthquake that occurs near a fault. The causes of intraplate earthquakes are poorly understood, but it is likely they are related to plates colliding at the plate boundaries. Reoccurrences of intraplate earthquakes are usually are much longer and are rarely felt on the surface. The ground motion caused by intraplate earthquake seismic waves dissipates more slowly. The strong, coherent rocks that make up the interiors of plates transmit seismic energy more efficiently over longer distances than the less coherent, weaker rocks near plate boundaries.  This is most likely the reason why the Oklahoma earthquake was felt by people as far away as Illinois. For more information on the Oklahoma earthquake check out: http://earthquake.usgs.gov/earthquakes/dyfi/events/us/b0006klz/us/index.html By the way……..Kansas has a place in popular culture because of the movie the Wizard of Oz.  Due to the movie, most people equate tornadoes with Kansas, not earthquakes.  Actually if truth be told, Kansas is NOT the number one state for most tornadoes. Texas is followed by Oklahoma as number one and two, with Kansas and Florida tied for number three.  Kansas has had some pretty fierce tornadoes and the devastation of a serious tornado is nothing to make light of.  But it is interesting to note that Frank Baum’s descriptions of Kansas in his book  The Wonderful Wizard of Oz  are based on his experiences in drought-ridden South Dakota, not Kansas.  Maybe it was easier to say, ”Dorothy, I don’t think we are in Kansas anymore”, than to use South Dakota in the sentence.   Anyway you look at it, when we think of Kansas we think of tornadoes, not earthquakes!